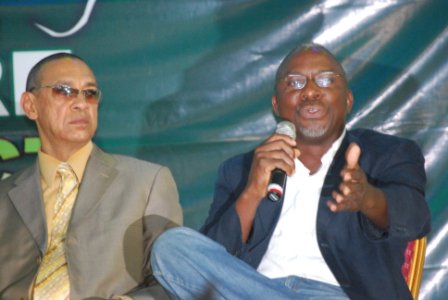 It was a full day of serious inspiration at The Future Pre-Awards Conference as some of Nigeria’s biggest movers and shakers from politics, Corporate Nigeria and the media came together to interact with young people at the pre-awards conference for Nigeria’s biggest youth event.

The format of this conference was radically different. The 3000-strong audience was able to interact frankly with the speakers from across three generations about issues that concern them. The hall was full to overflowing at the Welcome Centre Hotels, International Airport Road, Ikeja from 10am to 6pm when the conference held.

We should do things based on love and not money, Mr. Subair said in response to a question. A point Mr. Olojede emphasized when he said I wouldn’t make a good minister; so I declined an invitation to be one. I prefer to stay in the area of my strength. Fela Durotoye, known for his motivational messages also added his voice: It is essential that young people do what they know how to do, he said. Imagine if MI (the musician) ended up as a doctor!

Other speakers emphasized on what success really means. For Hon. Dabiri, Success is about how many lives you touch. Tonye Cole picked issues with Nigerians definition of the idea. Who set up Coca Cola and Pfizer? He asked. Few people know; but in Nigeria , there is an emphasis on who owns what, which shouldn’t be.

Just as Prof Utomi emphasized passion and perseverance, Mr. Bruce emphasized this with his personal story. I went to the bank to get a loan for Silverbird Galleria, he disclosed. And they tried to won the project¦ but eventually, I was in the right place at the right time, and it took off.

The final session had young role models, including the rapper MI, musician Omawunmi Megbele, female farmer and The Future Awards Business Owner of the Year 2009 Mosunmola Umoru, actress and producer Omotola Jalade-Ekeinde, and magazine publisher Hassan Rilwan, amongst others.

Emphasizing the theme for the conference, which is “Stop wanting, stop watching, stop waiting. Do something , he said: When I decided to make things happen for myself; I didn’t wait for good roads, electricity or anything. I got up and did something. Ms. Umoru gave a guideline for that, using her life as an example, It is very important for you to sit down and ask yourself what your strengths are.

There was a moment of drama when Hon. Dabiri was about to leave the venue. A passionate young man asked about the character of politicians and how we can be able to elect leaders that act on the people’s will alone. Hon Abike Dabiri stopped mid-step to take the question. Do you vote? She asked. It is not enough to keep complaining. People sit in their houses and say elections will be rigged, but if you don’t do something, then it will surely be rigged and those leaders we complain about will come back! So you need to come out and take action. I believe in passive resistance. Outside the hall, she re-iterated her stance on President YarAdua’s absence. We are saying that he should do the right thing and handover to his deputy.”

The day was also Prof. Pat Utomi’s birthday, and Mr. Bruce led the hall to wish him a happy birthday, whilst the organisers of the event presented a life-sized card to him. . .