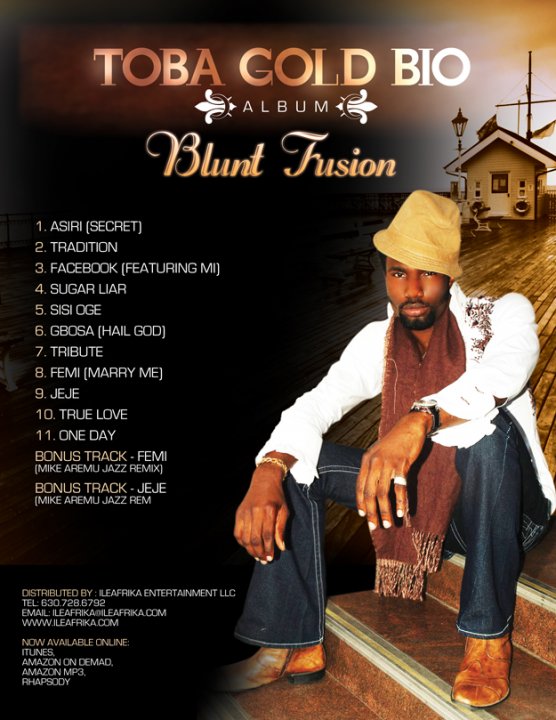 Toba Gold, known for bringing old school vibes into the modern music industry, replaces Singer Edene at the event, and will perform on Saturday July 17th at 10 PM.

TOBA GOLD Biography
Toba Olabode, artist, model, photographer, and creative art consultant was born in Lagos, Nigeria into the royal family of Chief Simeon Olabode Anifaloyin, the Onikoyi of Agbamuland, Kwara State and the lovely Mrs. Florence Anifaloyin. He is the second of seven children.

Toba Gold, like many African children, was surrounded by the sounds of various genres of music as he grew up, and he says he absorbed it all and knew he would pursue a career in the entertainment industry one day. In the meantime, Toba, like every good Nigerian youth, finished high school and went on to earn a Bachelor of Science Degree in Biochemistry from Lagos State University, Nigeria, presently in University of Liverpool for post graduate degree in International Law and Diplomacy

While at university, Toba, always resourceful and independent, worked in real estate as way of supporting himself. As his passion for entertainment grew, Toba who is over six feet tall, with smooth chocolate skin, and boyish good looks, registered with the Modela Modeling Agency and began a lucrative career as a model and fashion photographer. He was featured in The Nigerian Fashion Show, 2005, The Golden Fashion Show in Ghana, Emmy Collins Show in London, and several other shows in Nigeria and all over the globe. Toba has also gained success as a commercial model and has been featured in several campaigns including the television commercial for Gala U.A.C. 40th Anniversary, Starcom’s Billboard and other print ads.

When Toba graduated from university, he did not pursue a career in Biochemistry, but continued to model, and work in advertising and media marketing agencies. He was Creative Art Director for Image Infinity Advertising Agency, Artfield Advertising Agency, and Chateaux D’Atlantique Agency, all in Nigeria. He also worked as a consultant with the Turkey Hill Agency in Conestoga, U.S.A. In 2004,he established his own Media Marketing agency, Iconceptk Multimedia Limited (icon media),in Nigeria and Manchester, United Kingdom, and continues to act as its Chief Artistic Director/Head of Productions along with two associate owners, Chuka Okonkwo, and Augustine Edoja-Peters.

While earning a living in the marketing industry, Toba’s musical journey, continued. Toba says, he would compose songs in his mind and pick out tunes on the piano whenever he had a spare moment. His musical influences, like the Afro Beat sounds of Baba Fela, deep lyrical inspiration from legend such as Otis Redding, and Groover Washington, and the newer influences of Lagbaja, finally came together in a mind blowing sound fusion that some refer to as Afro Neo Soul. It is a blend of African music, soul, and jazz that has not been heard before. Toba’s use of his native Yoruba language in a way that makes even non-speakers feel like they know exactly what he is saying is amazing to hear.

In 1996, Toba released his first single, the groovy “Femi, Marry Me”, produced by Wole Oni of Instinct Production, to great critical acclaim. The single received massive airplay in Nigeria and internationally, and the accompanying video was a hit on Youtube. (http://www.youtube.com/watch?v=TZl72kaxex8 ). His next single, “Jeje”, with its deep lyrics, and soulful, sensual sound, climbed to the top of charts immediately upon release.

The international sensation that is Toba Gold, keeps building as his popularity continues to grow and he develops an ever stronger following worldwide. In June of 2009, Toba Gold performed at the Nigerian Entertainment Awards in Washington DC where he received the award for Best Indigenous Artist of the Year. DC area fans were later treated to another performance by Toba at a listening party at the popular Mango Café, in Bladensburg, MD. Toba’s US tour continued as he became the first Nigerian artist to perform at The Shrine, Chicago’s hottest new venue for world music. It was there that his title of Afro Neo Soul Prince, originally given to him by the President of ILe Afrika Productions, was made official. In August of 2009, Toba wowed London Audiences when he performed his new hit single, ”Facebook”, featuring Nigerian rapper, MI, at Club Traffic. Toba went on to perform at the Nigerian Young Achievers Award, UK. This event took place at the Battersea Art Centre,(BAC), in Lavender Hill, London and made an appearance at Ben TV London’s Ankara Festival as well as Yes Record’s Concert and at the Famous Notting Hill Carnival.

Toba wants to continue to produce music that can be appreciated globally. He wants his fans to always have a sense of his African roots in his music and vows to continue to write lyrics that are relevant to the lives of his fans and lyrics that go deep and touch the soul. Blunt Fusion, Toba Gold’s first album is due for release in September of 2009. It will contain the singles, “Femi, Marry Me”, “Jeje”, and the sensational, “Facebook” as well as, “Sugar liar” and others.