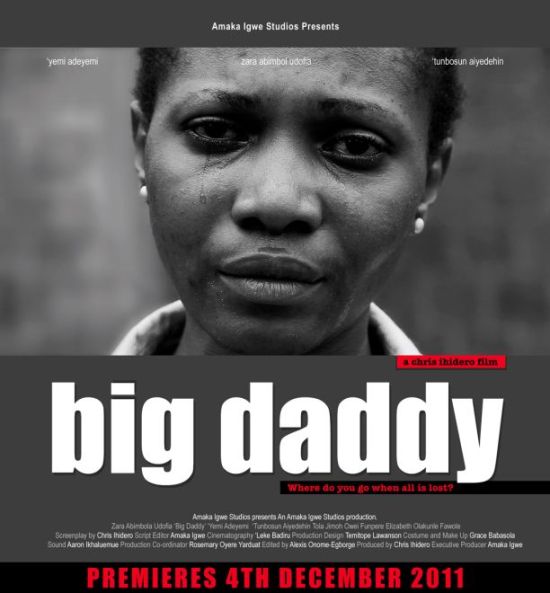 This Sunday, December 4, 2011, at the Silverbird Galleria in Victoria Island, Lagos, Amaka Igwe Studios will present a short film on rape and sexual abuse, as part of its social responsibility towards creating awareness and seeking solutions to the issue of rape in Nigeria.

‘Where do you go, when all is lost?’ asks Ihidero, who says he embarked on the project as a personal contribution to society.

‘We decided to make a film on rape because we believe that, for our society to truly combat this abnormality, we need to lay our
collective shame bare. We need to strip off the layers upon layers of coverings that hide the realities of rape and sexual abuse. We believe that we all need to come clean and accept the blame for whatever part we have played, consciously or not, in ensuring that rape victims continue to lack support and justice, and lives continue to get ruined. We fear that unless we collectively do something quickly, anarchy may be loosed upon us all in the very near future’, says Ihidero who is a writer, filmmaker and teacher.

The film will premiere this Sunday before select guests at the Silverbird cinemas in Lagos, before being shown on TV stations across the country, A young woman is at the crossroads. A victim of rape and sexual abuse by a family member from childhood to early teenage years, her life has become marred by the scars of the past. A gloomy future lies ahead as the scars that she
bears continue to threaten her future possibilities…’

‘The big questions is: ‘What would she do?’, Ihidero says.

We are not that naive to think that one short film can change everything and resolve all issues around rape and sexual violence. Our hope is that everyone who sees this film will ask themselves a few questions: Did I know about a rape incident and keep quiet? Do I realise that my silence enables rape to thrive? Have I failed to care? What would I do now if I were to witness such an incident again?’

Rape, sexual abuse and domestic violence are endemic in Nigeria. Human rights groups estimate that about 20% of Nigerian women experience physical, sexual or psychological violence from a spouse or male relative. Alarming as this is, it doesn’t tell the true story of rape, sexual and psychological violence in Nigeria. The collaborations and contributions of other participants in creating this pervasive environment for rape and domestic violence to thrive – participants like law enforcement agencies, the media, educational institutions and women themselves – is often underplayed.”